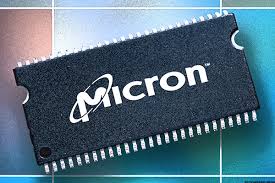 Micron Technology (MU) shares were demonstrated strongly higher in premarket exchanging Wednesday after the cell phone chipmaker bested experts conjectures in its second from last quarter profit and said it sees a strong bounce back in memory request throughout the second 50% of the year.

Micron said non-GAAP income for the three months finishing off with May, the organization’s financial second from last quarter, came in at $1.05 per share, down almost 66% from a similar period a year ago yet at the same time immovably in front of the Street accord gauge of 80 pennies for each offer. Gathering incomes, also, beat investigators’ conjectures, coming in at $4.79 billion yet falling 38.6% from the earlier year time frame.

Investigating the present quarter, and the following financial year, Micron said despite everything it hopes to see “sound year-over-year development” in worldwide DRAM semiconductor request, yet noted further capex cuts would be required so as to produce a decent supply-request balance in current inventories. Micron likewise said it had begun to send a portion of its cell phone chips to Huawei Technologies, following the China-upheld tech gathering’s boycotting by the U.S. government on May 15.

“We determined that we could lawfully resume shipping a subset of current products because they are not subject to Export Administration regulations and Entity List restrictions,” CEO Sanjay Mehrotra told speculators on a phone call late Tuesday.

“However, there is considerable ongoing uncertainty surrounding the Huawei situation, and we are unable to predict the volumes or time periods over which we will be able to ship products to Huawei,” he included. “Micron will keep on consenting to all administration and lawful prerequisites, similarly as we do in the entirety of our tasks all inclusive. Obviously, we can’t foresee whether extra government activities may further effect our capacity to ship to Huawei.”

Micron offers were stamped 8.9% higher in pre-showcase exchanging Wednesday, demonstrating an opening chime cost of $35.60 each, a move that would stretch out the stock’s year-to-date advance to around 13% and esteem the Boise, Idaho-based chipmaker at around $39.3 billion.

“We’re lowering our estimates meaningfully, as the U.S.-China trade dispute has meaningfully lowered near-term demand and visibility, in our view,” said KeyBanc Capital examiner Weston Twigg, who brought down his value focus on the stock to $45 per share. “However, we continue to see very favorable long-term demand drivers, and we view the rapid response by memory producers to limit supply (especially in DRAM, which accounts for roughly 70% of MU’s revenue) as a positive indication of rational behavior.”