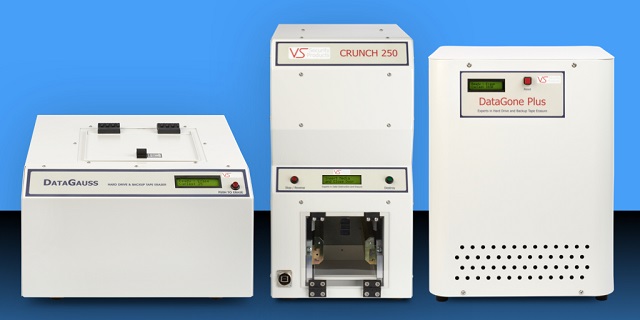 Technology manufacturer Verity Systems have released a host of new products in the wake of tightening data laws and the application of GDPR principles in countries around the world.

Since the European Union launched its GDPR law in 2018, other countries have been seeking to emulate and adapt the principles of GDPR into their own national legislation. Companies are seeking further guidance on data protection, and how to apply to these new laws which aim to protect consumer data – which is becoming increasingly valuable.

Verity Systems released its new DataGauss Max hard drive degausser this August, with a step-up in performance and data erasing capabilities compared to its previous generation of degaussers. The new DataGauss Max gives companies a fast, automatic way of erasing their data from hard drives in just a matter of seconds.

The manufacturer also released its updated Crunch 250, a hard drive crusher that now takes just 9 seconds to destroy all types of mediums. It was also just recently added to the NSA’s list of evaluated products making it a go-to for businesses and government agencies that want total security.

As GDPR gains traction, and becomes central to new laws like the California Consumer Privacy Act, it’s now a certainty that businesses need to be handling the removal of their data more seriously – using solutions like hard drive destroyers and degaussers to get their consumer data safely removed.